This page will hopefully make you think about what you are seeing and give you an understanding into the world of Equido and the Equines that teach us. We will try to be thought provoking and give you some truly spectacular action shots.  All photographs are produced by courtesy of Nikki de Kerfe. 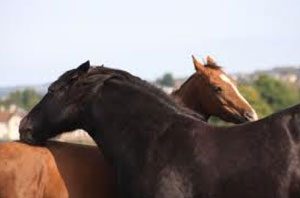 Horses will groom each other for social bonding as well as meeting physical needs, however, grooming can also be used politically to establish hierarchy without the need for physical violence.  Neither of these two mares particularly like each other and in fact do not normally socialise or graze beside each other.  However, the lower ranking mare offered to groom the higher ranking mare to show her respect and acknowledge her position in the group without the need for any unpleasantness.  The higher ranking mare (black) groomed back to show her acceptance, she did not groom for long nor did she put much effort into things, it was a token gesture on her part.

Sometimes a horse will find that they need to be a little bit more “pushy” and so they will move each other around as a passive way of acknowledging who out ranks who in certain situations.  Things seldom get out of hand and often the request to move is no more than a glance at the lower ranking horse.  Youngsters need more obvious signals such as ears back, lips drawn tight in a threat, head held high and tense and the tail flicking in annoyance.  This can be demonstrated in varying degrees depending on how senior a horse is.  Strangely enough, the more senior horses need to give the least threat, the more junior rankings often have to be very clear in their intentions. 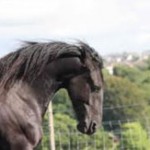 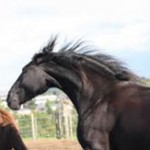 Sometimes it is up to the higher ranking horses to sort out disputes amongst the lower ranking, especially when youngsters are involved.  It is up to the older horses to teach youngsters proper manners and etiquette, so, if things start to get out of hand between two babies, an adult may well intervene and split them up.  The horse on the left of this picture is a yearling and the horse on the far right is a 2yr old.  They have been playing roughly with each other and it started to descend into an argument.  The older horse (the one in the middle) had been monitoring the situation for a while and when things finally got out of hand and the youngsters were about to kick each other, the older horse marched between the two of them and split them up. 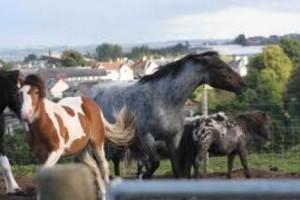 The really interesting behaviour occurs when two high ranking horses decide to “push” each other.  The horse on the left of this picture is a high ranking gelding who is used to getting his own way.  He can be forceful enough to back up his threats with a bite, but, more often than not, he is generally bluffing and seldom risks contact if the other horse outranks him or, as in this case, is a very senior mare.  The horse on the right is the highest ranking mare in the group, she seldom is aggressive with anyone and uses her sheer physical presence to move others out of her way.  The horse on the left had asked her to move over and she had ignored him, in a fury he launched into a full display of aggression.  Despite the apparent horrific attack that is looming, please note the apparent lack of concern by the horse on the right.  She knew that he was bluffing and the best course of action was to stand her ground.  The outcome of this was not (as would have been expected) the black horse loosing a piece of hide, but the horse on the right did not finish with a bite, but more of a “punch” with his teeth.  The black horse ignored him and he backed down and moved around her instead.  This clearly shows that horses are very, very good at reading the “intent” of an action, even the most extreme of behaviour might not have the intent on following through, likewise, a seemingly innocent movement can have a very serious intent behind it and can cause a horse to react very differently. 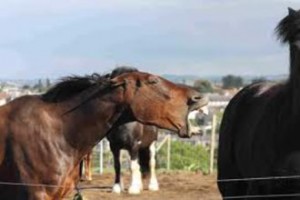 The above interactions all happened within the space of 20 mins as the herd was relaxing on the hard standing area of the field.  We are very grateful for Nikki de Kerf not only being the consummate professional photographer with her camera always at the ready, but for her ability to read situations as they develop.

Equido aims to teach us all to really understand what is happening with our horses in their daily lives, we are fortunate here at Ross Dhu Equestrian as we can observe our horses and their social interactions throughout the day.  The complexity of relationships within a group can be an eyeopener and we are learning every day how to interpret what is going on and try to gain a deeper understanding of what it means to be a horse.  The more we understand these beautiful animals, the more we are able to work with them in a more harmonious way.